Penelope Cruz and her sister Mónica Cruz are getting ready to launch their new lingerie collection tomorrow! Who's excited? It was announced last October that the sisters were working together to create this collection and finally it's almost here! They have paired up with Agent Provocateur

to create their line called L'Agent! The L'Agent diffusion line will feature 15 styles, that will include a selection of bras, briefs and corsets, and priced $70-$100.

brand's autumn/winter AW12-13 Collection ad campaign! Which by the way if you didn't see those ads, they were super HOT! Check them out below! 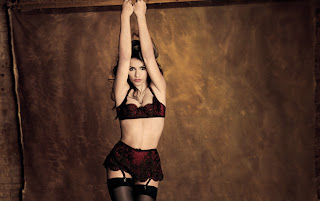 Sarah Shotton the Creative Director for Agent Provocateur had nothing but good to say about the two sisters, "Mónica Cruz was sensational (in our campaign), and Penelope Cruz has always been a muse for Agent Provocateur. Penelope and Mónica are both long-time lingerie fans and have brought a new design sensibility to the brand. Working with the Cruz sisters was a great opportunity to bring the diffusion line to life and to further strengthen the brand's relationship with them."

The two gorgeous sisters have been involved in all aspects of the collaboration. They have had a hand in the design of the labels and hangers. They even research vintage items and fabric swatches for inspiration. Making this a full family affair, Penelope has come up with a short campaign film to celebrate the launch of her new line! The L'Agent film marks Penelope Cruz's directorial debut which stars her husband, Javier Bardem, the very sexy model Irina Shayk, and her sister Mónica Cruz, who has been working alongside Penelope to create this collection! There is also a clan of lingerie models in the mix as well! This film was shot in Madrid, and interesting enough their brother, Eduardo Cruz came up with the soundtrack for the film, and their mother, Encarna Sanchez helped out a lot on the set!

Penelope had an interview with WWD to talk more about this exciting adventure, "(It was) very personal and important for me, a very interesting experience," Cruz told WWD of the film. "They gave me all the freedom and I was able to tell the story I wanted to tell. I used women of all shapes and sizes, as it was important for me to let women know that this brand is for everyone. I chose Irina, as she is such a vivacious woman, and with all the beautiful women in the campaign, I really needed someone who would keep the audience's attention." Her decision to use Irina was genius! Irina will definitely be a great one to fulfill her vision on this project!

The moment you all have been waiting for! You be the judge! Tell us what you think?

Don't know about you, but this is one collection we can't wait for!  The L'Agent collection designed by Penelope and Mónica Cruz in collaboration with the luxurious lingerie brand, Agent Provocateur, will debut tomorrow, Aug 1st, (Net-A-Porter is were to look for it)!

Which individual peice is your favorite? Are you going to buy it?