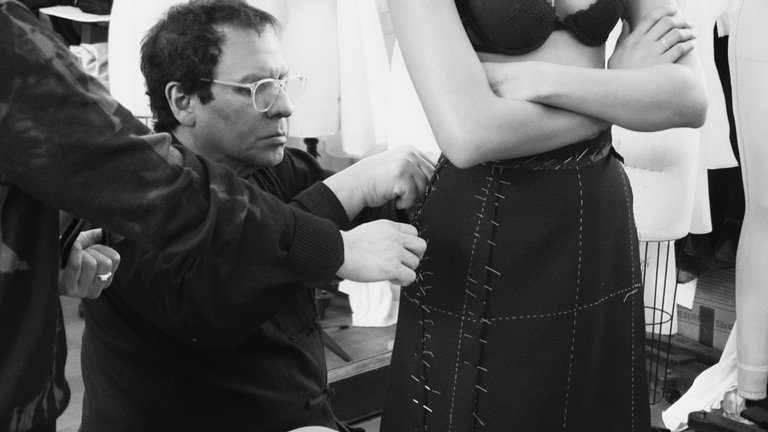 Famous but underappreciated has become a foolproof template for documentary subjects in recent years, used in films as disparate as “Searching for Sugar Man,” “20 Feet from Stardom” and “My Architect.” Add to the trope a cinematic fascination with fashion and you have the basis for a poetic documentary about a tempestuous and imposingly gifted Tunisian-born French designer who, while exalted among cognoscenti, is all but unknown to the wider world.

The designer is Azzedine Alaïa, a septuagenarian best known for the figure-enhancing designs he has created for some of world’s more exceptional women, including Marion Cotillard, Greta Garbo, Grace Jones and Michelle Obama. The film is a self-financed labor of love created — with the rare cooperation of Mr. Alaïa — by the fashion stylist Joe McKenna, himself the quiet force behind campaigns for Balmain, Giorgio Armani, Jil Sander, Miu Miu and Versace and formerly the fashion director-at-large for The New York Times’s T magazine.

In 2013, Mr. McKenna first asked himself how no one had thought to record the life and working process of an award-winning master at times as much feared as revered.

“I’d been asked to guest-edit an issue of Self Service magazine,” he said by telephone from Paris. “And I thought there was sort of restlessness in fashion, so I interviewed a lot of designers and C.E.O.s and asked them what was wrong.”

The answers were not surprising. Pressured by corporate leaders and the new exigencies of social media to churn out as many as six collections a year, many designers had begun to burn out, whereas “Azzedine remained an exception to all that,” as Mr. McKenna said.

Although the luxury goods conglomerate Compagnie Financière Richemont took a majority stake in Mr. Alaïa’s business in 2007, pouring money into new retail space and acquisition of a corporate headquarters near the Avenue Montaigne, the nerve center of his operation remains a house in the Marais where he lives in cosseted monasticism, surrounded by friends and assistants, three dogs and eight cats.

Showing infrequently and following no schedule but his own, Mr. Alaïa creates designs in a manner all but forgotten by contemporary fashion.

“I suppose I wanted to show people that there was this one person apart from all that,” said Mr. McKenna, referring to the world of corporate fashion and one-hit Instagram wonders. He added: “It’s very much one person’s hand and one person’s mind. There are no teams of people. There are no reference books or vintage clothes. I don’t think Azzedine would even know what a mood board is.”

Throughout Mr. McKenna’s intimate, untitled 26-minute homage, which is available at joesfilm.com, experts and members of Mr. Alaïa’s coterie — Naomi Campbell, Carlyne Cerf, Grace Coddington, Katie Grand, Sophie Hicks, Suzy Menkes and Nicolas Ghesquière, creative director of Louis Vuitton, are a few — testify to the rigor of his practice; to innovative construction methods more closely allied with architecture than fashion; and to a temperament that is nurturing and dictatorial by turns.

The one person not heard from is the designer himself who, though filmed cutting, stitching, measuring, drawing, laughing, presiding over a communal dining table or curled up with his massive St. Bernard, remains a sphinx.

“I did try late at night,” Mr. McKenna said. “I said, ‘O.K., we’re just going to turn on the camera now and have a normal chat.’ But then the minute it seems like you’re interviewing him, he clams up.”

Tags: fashion
Thank you for using the Fashion Industry Network.  Have you helped another member today? Answer questions in the forum. Helping others brings good luck.