Designers at London Fashion Week should show at least two sample sizes, one of which should be a UK size 12 or above, the Women's Equality Party has said. 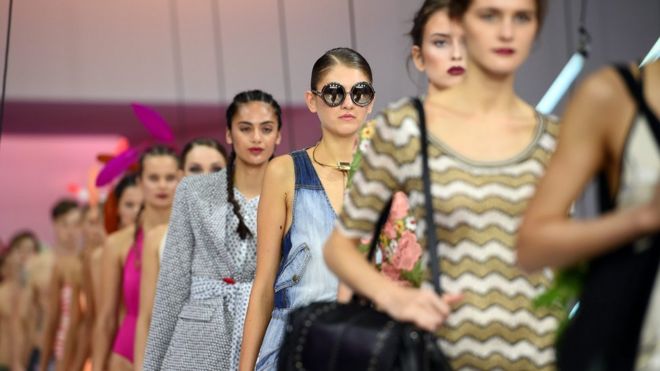 image:prom dresses london
Its #NoSizeFitsAll campaign has called on the British Fashion Council to lead the way for healthy body images at the event, which starts on 15 September.
The WEP said: "Designers churn out sample sizes so small that models have to starve themselves to fit into them."
The BFC said it takes the issues the campaign raises "very seriously".
A UK size 12 or above is considered "plus-size" by the industry, while sample size clothing worn by models on catwalks tends to be a UK size 4, or a US size zero.
Ms Walker said 28 studies from the UK, Europe, North America and Australia had found that images in the media of models had a direct impact on how women viewed their bodies, with negative body image putting someone at a considerably heightened risk of developing an eating disorder.
The campaign is also calling for body image education to be mandatory in schools, for a change in the law to ensure models are of a healthy weight and for magazines to include one plus-sized spread in every issue.
With less than a fortnight to go until the opening of London Fashion Week, Ms Walker said the British Fashion Council (BFC) "has got to raise their game".

Thank you for using the Fashion Industry Network.  Have you helped another member today? Answer questions in the forum. Helping others brings good luck.