Analysts will tell you that during times of austerity, lipstick sales will soar - it's a phenomenon known as the lipstick index, and it's a widely recognised economic term. The reason being, say psychologists, is that the relative return on your investment is worth its mood-boosting weight in gold during a depression.

But has the phenomenon had its day? Mintel has reported that the lipstick retail sales in the UK had risen from £126 million in 2012 up to £137 million in 2014, despite the fact that we had come out of the recession by the end of 2013.

And what of the red lipstick sales boost that Giorgio Armani has witnessed this December? The Italian fashion house has revealed that sales of crimson lip colour in the UK have doubled this month, with a record-breaking 31,000 units sold so far. "Britain is dreaming of a red Christmas," reported the press office. 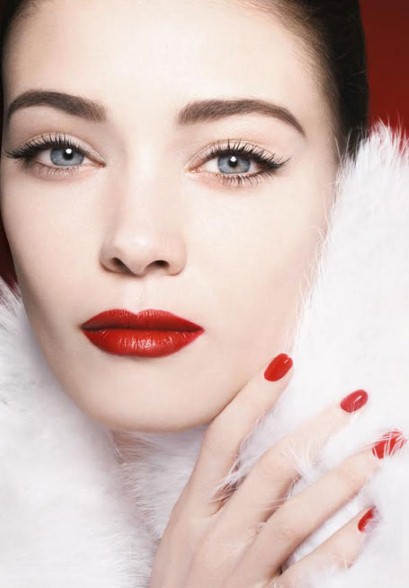 Ironically too, the lipstick sale boost opposes research carried out by Giorgio Armani earlier this year. Wanting to delve a little deeper into British beauty habits, women revealed to the beauty brand that they were afraid to wear red lipstick for seven reasons: it thins our lips, it reddens our skin, doesn't match our style, doesn't complement our eye colour, dries our lips out, clashes with our hair and then leaves us feeling self-conscious. "Women can often feel reluctant to wear a red lipstick with the most common misconception that 'red just doesn't suit me,'" says Giorgio Armani face designer Vanessa D'Ambrosio.

"But, there is a red out there for everyone," adds D'Ambrosio, who joined her brand in helping women find their perfect shade of red with their on-counter efforts. It seems it worked and we've got the message; twice as many red lipstick bullets sold in December than any other month of the year says Giorgio Armani, the most popular shade being 400, modelled in the snap above.

It would seem that our lipstick buying habits are no longer an economic indicator, but perhaps more a sign of a new-found cosmetic confidence. Either way, the beauty brands are finally going into the black thanks to our new red obsession.