With New York and London living up to their respective reputations for Fall '09 amidst all of the burgeoning dilemma's brought on by the chaotic financial & political climate of the world, it was foreseeable that Milan would either go the sensible pragmatic sportswear route, or be trapped by it's over-sexualized, over-stylized extravagant musings of the past. What we seemed to have gotten is that many designers seemed to have been lost somewhere in the middle of high-brow minimalism and downright tacky festiveness. What was exhilirating was that there was something for every kind of fashion girl from the one's who party like it's 1989 in full Baroque regalia to the uppity society women of the old world to the slick, street-smart girls championing today's urban sophistication. And as you could have guessed, it was that urban muse that felt right on the money to us! 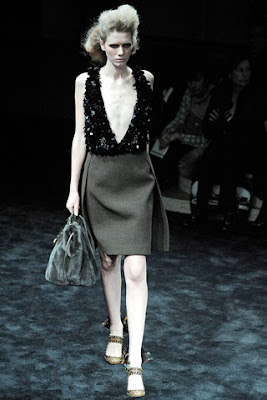 Prada(also shown above)-After several past hit-or-miss collections teetering on the border of tastelessness rather than provocation, Miucca Prada smartly channeled her 90's hey-day for fall and hit upon all of our favorite Prada-isms. The core of the collection may have been based on fur, smart suits and beautifully cut coats yet the end result was positively hardcore, aggressive and yet astoundingly minimal. And speaking of Prada-isms, they were all here in full force from the vaguely romantic old-world Italian pretense, to the slight vintage feel as well as the embellishments that overall resulted in a romantic Mad-Max feel. We especially loved the use of fur on paneled dresses and the heavily decorated fringed leather finale looks. 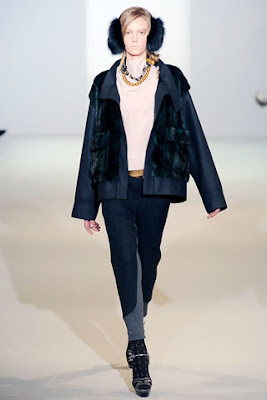 Marni-Two season's ago many journalists seemed to quip about the fact that Marni is always resolutely Marni, and that it never seems to change direction, however we feel the need to mention that if it ain't broke, don't fix it! Marni once again had us feeling giddy with it's super-charged sportswear that was as optimistic as it was viable. This collection was heavy on navy-blue and offered some great takes on the fur front as well as some impossibly chic accessories that retained the house's love affair with the Mods of the 60's. Afterall, fashion is not primarily always about re-inventing the wheel, sometimes it's also about celebrating today's victories. 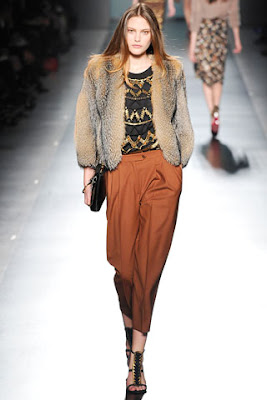 Etro-Over the past few season's Etro has become to us, one of Italy's go to house's for fresh, uncomplicated sportswear that is always impeccably on mark. It may be heralded for it's rich paisely prints and explosive color-ways, but what really excites us about the label is it's penchant for heady ethnic prints and dynamic, southwestern inspired accessories & hardware.

Comment by Claudius Phillips on March 5, 2009 at 2:23pm
The fashion industry needs to reinvent itself. The ever concentrated form of trivia used to discribe couture designs and or hi-brow frivolity, has lost its appeal. One just has to look at the lack of interest some major desingers are paying to blue ribbon presentation events.They are saying by their non participation that the 'umph' and creativity is lost. Fashion need not be outlandish to be creative, or macarbe and scurilious.