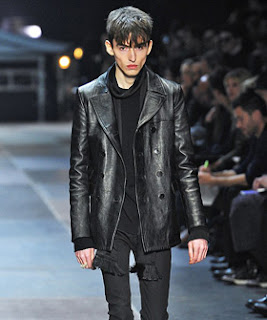 The Ultra Thin Body Image has been followed very closely by Iconici Tv . Up until recently most of the focus on this subject has been mainly on female models in the fashion industry. Hedi Slimane who is the Creative Director for Saint Laurent, sent this model down the runway during the Yves Saint Laurent show in Paris. This started some controversy! Fashion blogger Poppy Dinsey twitted "Woefully irresponsible model casting at YSL yesterday. Speechless.", with this picture of the male model. Now the subject of male anorexia or some say "manorexia", is coming to light. There are rules and guidelines for women but does this apply to men as well?

Image via The Daily Mail

According to the National Association of Anorexia    Nervosa and Associated Disorders more than 24 million Americans, both females and males, have an eating disorder. Eating disorders have the highest mortality rate of any mental illness. They also say that, an estimated 10-15% of people with anorexia or bulimia are male. Men are less likely to seek treatment for eating disorders because of the perception that they are “woman’s diseases", and they are often denied help because it is perceived males are one of the biggest causes of female anorexia. Among gay men, nearly 14% appeared to suffer from bulimia and over 20% appeared to be anorexic.

The CFDA formed a health initiative to address this global fashion issue back in January 2007. They formed a committee to propose steps to promote wellness and healthier working conditions. Many have followed suit over time like Vogue and their 19 international editions and even Tyra Banks spoke out in support of the decision to stop using impossibly thin models in photos. The overwhelming concern and comments on the "too thin" models posed questions of whether or not these models were healthy. The CFDA  says "the fashion industry can begin a campaign of awareness and create an atmosphere that supports the well-being of these young women." Over time they have made progress! However, the subject of male model's is not specifically mentioned?

There are discussions and arguments stating that just because these models are really thin, does not mean that they have an eating disorder. This is very true! You really can not judge a book by it's cover. Some people are just naturally very thin. So how is anyone supposed to really know if these models are really healthy? There are some eating disorder warning signs you can find on the CFDA Health Initiative website!

What do you think? Do you think that Heidi Slimane went to far using this model? Do you feel that men should be left out on this subject? Are men not subject to the pressures that females are in this industry? Comment and let us know your thoughts!