Doing a bit of research on Diane von Furstenberg and found the following press release from January 24th, 2008. Firstly the image caught my attention, but also the comments, "The campaign marks von Furstenberg's commitment to establishing her company and her style on their own terms, independent of her image. As David Lipman says, the intention is "to move the brand away from the person, even though her soul and her spirit are still in it." I thought it interesting that they would attempt to separate the brand from the person. Obviously a business strategy in the works at that time. But I wonder the official short term or long term goal behind the statement. Was she ill... Was she in conflict with other people at the company... Was the corporation taking steps to make sure that the brand could survive without her... Most probably none of the above. Just curious about how serious they were about separating the "brand" from the "person".
"Diane von Furstenberg with the artist Francois-Marie Banier and the creative vision of David Lipman, featuring Natalia Vodianova, has created an unprecedented campaign that infuses the spirit and distinctiveness of the eponymous brand. 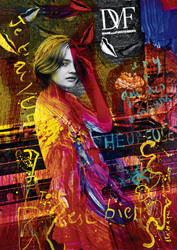 The campaign marks von Furstenberg's commitment to establishing her company and her style on their own terms, independent of her image. As David Lipman says, the intention is "to move the brand away from the person, even though her soul and her spirit are still in it."

Inspired by von Furstenberg's desire to reflect the DNA of the brand -- the power of women and their courage -- Banier produced some 50 black and white images, and with strong brushstrokes, smudges, and spatters, he applied bold color and writing to each photograph to create layers of complexity, both visual and emotional, seducing the eye and the mind.
Photographed in Paris and New York, he captured Natalia in a way she had never been seen. "I found her immensely beautiful, with a very interesting soul," says Banier of Vodianova. But in the end, he says, what inspired him to take on the project was the opportunity to create an image of optimism in the life of a woman.

Known for his iconic portraits, painting and writing, Francois-Marie Banier's friendship with von Furstenberg dates back to the early seventies. The mutual appreciation for each other's talent has grown to an intimate friendship and thus inspired this seminal collaboration.
With David Lipman, as Diane's partner in this project, they have succeeded in bringing to life Diane von Furstenberg's vision for the brands debut campaign.

"With so many magazine images that are so completely retouched, we've gone in the opposite direction showing the soul of a woman. It is the most beautiful thing I've seen in my career. It's aggressive and strong in the most elegant way," says Lipman.

Like von Furstenberg's designs and strong prints, the trilogy of talent developing this campaign was spontaneous and full of chemistry. Her role in the campaign, she contends, was simply to make introductions.
"And then," she says, "Once they started, you couldn't stop them.

Diane von Furstenberg, one of the premier names in American fashion, was founded in 1972 by the designer. Renowned for its iconic dresses and prints, DVF has grown into the global luxury lifestyle brand known today. The company, headquartered in New York City, has expanded to a full comprehensive line of ready-to-wear, swimwear, handbags, footwear, luggage, accessories, fine jewelry, fragrance and rugs. Its distinct collections are sold in over 56 countries and in 22 namesake retail boutiques worldwide."

Comment by Maryanne on May 17, 2010 at 9:17pm
Natalia Vodianova is an amazing model.
Not only for her outspokeness about the industries 'continued' problems with size.
At one pojnt she was criticised about her' weight gain' at the couture fittings.
When it was only her body maturing naturally.
She also recently hosted the Love Ball with Harper's Bazaar in London, to benefit the Naked Heart Foundation which Vodianova established to aid deprived children in the UK & Russia.
She did come from a rather impoverished childhood in Russia.
Diane Von Furstenberg was at the charity event.

Diane Von Furstenberg is a lovely, strong, feminine woman, whom I had the pleasure of speaking with on many occasions ~ we lived in the same building in the early 1990's.
A number of times, she'd be jetting in from Paris as I was on my way out ,and we'd meet in the elevator or lobby, but she always stopped to chat.
The prints she chooses for her dresses are so beautiful.
That famous bracelet she's done for H. Stern is gorgeous, as all her pieces of jewelry are.

One really can't move the brand away from the person.
It was never done with Chanel, despite Lagerfeld's talent, one still thinks of the original.
Same with Dior and all the designers at the helm.

The photo of Vodianova and the new ad campaign is just colour saturated and whimsical.