Check out THE IFA Paris blog!

Our Behind The Seams Panel Hits WWD

Hey loyal readers— if you happened to pick up today’s issue of WWD, you may have come across a familiar name. Yep, right down there on the lower left of page 8 (what, you don't get the print edition?) you'll find an ad for Afingo.com’s…

Readers—we have some exciting news from our Afingo team. Our co-founder, friend, and Brulee designer Kristian Giambi appears in today’s WWD article, “Resort…

We stock a large inventory of the best wholesale topsfor you, our valued customers…

Two-finger rings at Banana Republic? The trend must be here to stay. 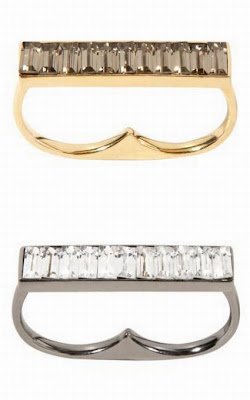 Two-finger rings have increased in popularity over the past few months. What was once considered strictly urban wear (80s Hip-Hop, anyone?) is now mainstream. Designers like Erica Anenberg have flipped the two-finger ring to a point where it is now suitable for a night out on…
Continue

Amongst all the different social tools available, Twitter, more than Facebook, allows companies to watch their customers’ opinions and involve them.

However, the different approaches the brands choose are not all good or bad, as this medium has yet to be fully apprehended.

Bop Around In Your Leopard Booties!…

“It’s very fashionable to be a designer now. The thing that there are too many fashion blogs made me more aware of what is hip and trendy, and certainly exposed me to high-end brands and designers I probably never would have sought out on my own. At the same time, being critical is a part of my work, so I do have a discerning eye for the things that go too far, or don’t go far enough. There are too mane designers. In that sense, I’ve become a fan of designers that push and challenge themselves.… Continue

Statements were made in classic diamond… When doing some research on a previous post, I came across a rather nifty little item called the ‘Stiletto-2-Go’ kit by our friends at Foot Petals. Invariably, we have all had that moment of desperation to try to salvage that pair of fabulous heels that feel make our feet feel like we have nails in our soles. Worse still is that ever so seemingly insignificant rub that turns into that blister from hell. We like that as much as we like… Continue

Paging Elizabeth Wayman will you please come to the front of the line….To be honest with you I had never heard of Elizabeth Wayman when I pillaged this gorgeous black
dress from a thrift store, all I knew is that I loved the cut and
thought this dress had STYLE. The label is Elizabeth Wayman
New York size 4 and so what I…

A woman stopped by, unannounced, at her son's house.
...She knocked on the door and then immediately walked in. She was shocked to see her daughter-in-law lying on the couch, totally naked.
Soft music was playing, and the aroma of perfume filled the room.
"What are you doing?!" she asked.
"I'm waiting for John to come home from work," the daughter-in-law answered.
"But… Continue "Right or wrong, people will first judge you by the way you look, so it's important to always look your best”

Wardrobe Classics and Staples (how many on "The List" do you have now)?

Well, it is that time of the year again! So, before you continue to do your back to school/work shopping, here is the list I post yearly of Wardrobe Classics and Staples.

By definition, these are items that will NEVER go out of style and the things that EVERY woman should have in her closet. Click…

Museum Exhibit Explores The History Of The Chinese Qipao Dress

Designers— remember the first dress you put together? It was most likely one of the first pieces you ever created when you learned how to sew. As one of
the most basic articles of clothing you must know how to make, it's
helpful to know the history of this quintessential ladylike garment. For
instance, take this article we discovered. Inspired by the…

Hey designers—here are two reads you may want to add to your coffee table and use as inspiration for your next creative moment. First up, is a
book on the life of Emilio Pucci. Appropriately titled,…

Who's The New H&M Collab Designer? Our Guess

So there he sits, sipping on his espresso, plaid clad, and waxing philosophic on the beauty of smart women—so who the tell is he? H&M
is hoping you play along with this little guessing game as they begin
the PR buildup to the release of their next designer collaboration
series. Offering only this short video (available here at…